The Royal Solent YC hosted the Royal Artillery Yacht Club Regatta over the weekend of 15th and 16th September. There were two J/109s competing, Jukebox under the command of Chris Copeland and Trojan, representing the Royal Engineer’s Yacht Club. Chris Copeland has kindly written an account of his first outing with a non-overlapping IRC jib as will become the class headsail from 2021.

This regatta is run annually by the Royal Solent YC and this year was the 62nd time it has done so. The Regatta is run for the Royal Artillery Yacht Club and a hotch-potch of boats owned or chartered by RAYC members compete in a series of classes, depending on their handicaps. Traditionally three races are run on the Saturday and then there is a drag race on the Sunday back to Gosport.

Juke Box skippered by Chris Copeland was entered into the IRC class.  Happily Trojan, another J109 owned by the Royal Engineer Yacht Club, had also entered with the hope that she would make it a competitive weekend for Juke Box. This was important because we had been kindly lent a new non-overlapping lightweight headsail through David Richards and we hoped the occasion would give us the opportunity to conduct an initial trial. The main question was would she point higher?  Would her upwind speed in light airs be similar to that achieved with a No 1 Genoa?

At this stage I should say that I was one of the protagonists against the change to non-overlapping headsails as I considered that it may make light airs sailing against the Solent spring tides very difficult. Furthermore, John Smart who had very kindly allowed me to use Juke Box for the regatta, had purchased new No 1 & No 2 genoas at the beginning of the season and was keen to ensure he made good use of them before the new rule came in.

Saturday was a beautiful day with forecast winds of up to 15 knots and a spring flooding tide; perfect for what we were trying to achieve by way of a trial. However the breeze was slow to arrive and the first race was abandoned as only Juke Box was able to cross the start line and we had achieved about 400 yards up the track when called back. The committee then decided to set a simple windward-leeward just as the wind started to fill in. Trojan had an equipment failure and was a DNS for the first race, although a Contessa 32 with a huge No 1 genoa was sailing fast and giving us something to think about.

A similar race was set for the second race with the wind now up to 10-12 knots. The final race was much longer making full use of the Solent with a beat up to Black Rock, a run down to Solent Bank, a reach into Caldwells on the north IOW shore and a beat back to the finish. Thus overall I felt we had been given ample opportunity to test out the non-overlapping sail during the course of the day. Trojan had flown her No 1 genoa throughout the day and did not appear to have any serious advantage over us. Jukebox took line honours in all 3 races. 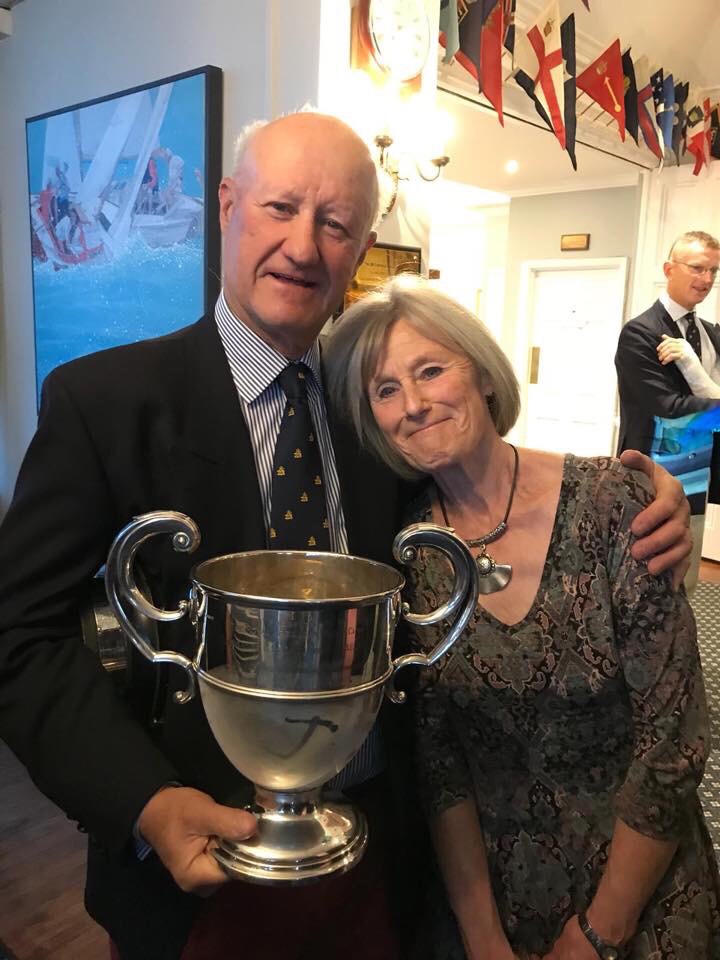 It would be wrong of me to make any forthright assertions about the overlapping genoa, but in the conditions I did notice a definite ability to point maybe 5 degrees higher and I think both David Cromer, tac/nav and Damien Tobin, crew chief, would agree to this. Furthmore tacking was much quicker and we rarely dropped to below 4.5 kts from 6kts of upwind speed. Certainly the boat felt excellent to helm going upwind, although it must be said we were in very flat water throughout the day.  Greater upwind boat speed compared to flying a No 1 Genoa?  Well, I’m not sure, the jury is out on that one, but overall I did feel comfortable helming the boat and in a short tacking situation in light airs, I think we would have been slower over the ground if we had flown the No 1 Genoa.

I would like to take this opportunity to thank Trojan for entering the regatta and hope she will do so again in the future. She had a scratch crew who had little experience of the J109 and they did extremely well.

So overall, this was a good first trial for Juke Box sailing in light airs, in a spring tide, using the non-overlapper. Much more experience is naturally required and I look forward to the occasion when there is class racing in light airs and Juke Box turns up flying her beautiful No 1 Genoa and the rest of the fleet are flying their non-overlappers! Well that would be a challenge! How about the Taittinger Regatta 2019?

View all posts by Jiraffe